The Abert’s squirrel (Sciurus aberti) with its prominent ear tufts, is native to the region and is always ecologically tied to ponderosa pine forests at elevations of 5,600 to 9,000 feet (e.g., Black Forest).  They have three color phases, the most common being jet black. Aberts’ are rarely a nuisance to people.
​ 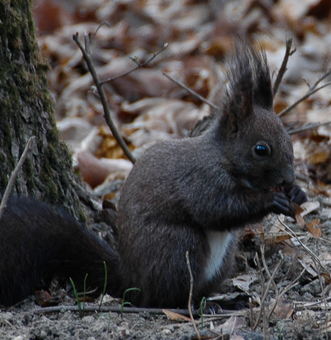 ​Pine (or “spruce”) squirrels (Tamiasciurus hudsonicus), are the small, noisy squirrels native to spruce/Douglas-fir forests at elevations of 6,000 to 12,000 feet.  These feisty little guys, with their characteristic rapid-fire chatter, are typically grayish olive-brown in color, with a distinctive white eye ring.  It’s not uncommon for them to be a nuisance by choosing to live in attic crawl spaces, particularly up Ute Pass and places west.  Common damage includes gnawing at access points, scampering in ceilings and soiled/matted insulation.  They typically have one litter per year from mid-May to mid-July.
​ 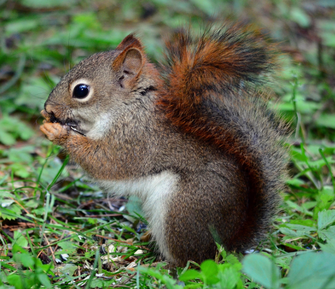 ​Fox squirrels (Sciurus niger) are the rather large, bushy-tailed squirrels so common to our backyards and bird feeders in the region.  These abundant squirrels are not native to the Front Range or places west.  Rather, they were introduced in Denver and Colorado Springs in the 1930’s and ‘40’s so we would have squirrels in our parks like back east.  Big mistake!  Based on the number of calls we get, fox squirrels are the #1 nuisance animal in the region.  They are a gray-brown color, with a creamy orange belly.  A melanistic, or black phase (minus the ear tufts!), is found in some areas.  They typically have two litters per year, generally in February and August, with young emerging in April and October.
​ 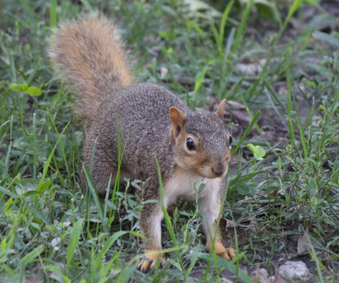 ​The primary reason fox squirrels are such a nuisance is that our long, cold winters, coupled with relatively few hollow hardwood trees, literally force them to seek shelter indoors, i.e., inside human structures.  We estimate that 75% or more live in house attics, commercial buildings, storage sheds, etc.  In fact, without access to man-made structures and bird feeders, relatively few fox squirrels would survive in the region.  Common damage includes:  gnawed holes in siding/soffits, scampering in ceilings, soiled/matted insulation, chewed wires, getting stuck in chimney flues/fireplaces, getting into living quarters, girdling ornamental trees, eating fruits/flowers and disrupting bird feeders.
Our approach to controlling squirrel damage typically includes:  1) an investigation/inspection to determine species, find points of entry and evaluate damage; 2) setting appropriate, specialized squirrel traps near entry points or damage; 3) monitoring to insure no animals remain in the structure; and 4) repairing/excluding entry points to both look good and permanently keep squirrels out.  We also will modify roof vents, install chimney caps, install tree collars, trim tree branches and utilize chemical repellents when appropriate.  Although it’s legal, justifiable and often best to euthanize nuisance squirrels, the majority of our clients prefer relocation.  We honor that preference by releasing squirrels in suitable habitat, at least five miles from capture site, at no additional charge.
​
​If you need help with a squirrel problem, call us at 719-636-1014 for an investigation and prices.  We’d be happy to help.