Bobcats are very adaptable wherever they have adequate cover and food sources. They can be found in northwoods bogs, hardwood bottomlands in the south, riparian corridors on the plains, desert scrubland in the southwest and rocky canyonlands of the west. I’ve even seen their tracks on several occasions in deep snow near timberline (11,500 ft) here in Colorado.
​ 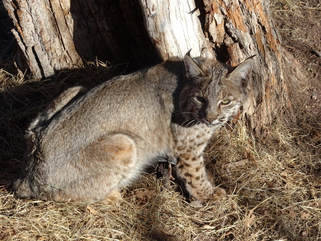 ​Being elusive and secretive, bobcats are rarely seen in the wild, even when common. However, now that ‘cats are increasingly adapting to suburban environments in close proximity to people, they are becoming a common sight. Hardly a week goes by here in Colorado Springs that someone doesn’t tell me they have bobcats in their neighborhood.
​
In Colorado the distribution of bobcats appears to be determined by cover, competition and rabbits. In the ‘60’s and early ‘70’s ‘cats were widespread and common to abundant over much of the state. Lion numbers were down, coyote populations had been suppressed by aggressive control programs and rabbits were thick everywhere. But then lions started a comeback, coyote numbers increased and rabbits all but disappeared around 1980. Bobcat numbers and distribution began to decline. Likely high harvest levels were also a factor in some localized areas as fur prices rose rapidly in the late ‘70’s.

Bobcats, coyotes and lions can coexist in high numbers when cover is good and the prey base is high. Biologists call this niche partitioning (i.e., sharing). However, when the prey base (especially rabbits) is low, there is usually an inverse relationship of population levels between bobcats and coyotes and/or lions. Lions will regularly kill bobcats. Coyotes and domestic dogs kill them on occasion. Large male bobcats will kill other bobcats as well. However, with the right cover and abundant rabbits, bobcats can flourish and expand their range. That’s happening in many areas of the US as we speak.

Bobcats are true carnivores or meat eaters that require a high level of protein. They don’t chew their food like omnivores. Rather they shear off pieces of flesh with their specialized carnassial teeth and swallow them whole. Although rabbits can constitute over 90% of a bobcat’s diet, that’s not all they eat. Deer, rodents, birds, reptiles and even insects can be on the menu. They can manage very well on very little water.

Bobcats are highly equipped to be predators, starting with their sharp, retractable claws, impressive fangs and powerful bite. Similar to coyotes, bobcats hunt first with their eyes (vision) second with hearing (audition) and third, with smell (olfaction). They have extraordinary vision, particularly at night when they can see six times better than we can. Their close-together, front-facing eyes provide excellent binocular vision and depth perception. Although they likely see in mostly black and white, some research indicates they can also see shades of green, blue and red. Bobcats are hot-wired to detect movement and their big eyes are excellent motion sensors.

Bobcats have large ears with adaptations (including tufts) which give them excellent hearing, especially at higher frequencies. Anatomically a bobcat’s nose doesn’t have near the capacity to detect odors like long-muzzled canines, but they are not “cold-nosed.” They are very adept at detecting scent markers (i.e., urine and feces) of other cats and canines. They also have a strong attraction to various mints and musks, often rubbing their faces on the odor source. For cats, their sense of smell serves more of a social function than a hunting one. Hence wind direction is usually not a concern when calling ‘cats.

Another sense at which ‘cats are adept is touch. Their toe pads, long whiskers and ear tufts are very tactile. These features allow bobcats to tread very lightly and navigate thick cover with ease, without sound or disturbance. They epitomize stealth.

In addition, ‘cats are blessed with incredible athleticism. They are extremely fast, quick, agile and coordinated. Their hunting style is a combination of still hunting and spot-‘n’-stalk, followed by a swift ambush and kill. They are true master hunters.

In temperament or disposition, bobcats are a lot like domestic house cats. Unless actively hunting, their primary activity is inactivity: resting, cat-napping or sleeping! And they can be described as independent, self-willed, aloof, indifferent, fickle or even “blonde.” They certainly have a mind of their own. Sometimes they have a five-second attention span; other times they can be relentlessly fixated. The first ‘cat I ever took was a big “blue” tom crouched under my friend’s rabbit hutch behind his cabin. When I very carefully peeked around the corner of the cabin, the big cat gave me a quick glance of recognition then was instantly mesmerized again by the rabbits.

Also, like housecats, bobcats are very curious and playful, sometimes to their demise. They can also be quite vocal with assorted meows, hisses, chirps, growls, purrs, spits and caterwauls. Toilet habits are similar too. They scent mark their home ranges frequently with urine and/or feces. Simple rakes or scrapes usually contain a few drops of urine. Females are more likely to cover their droppings than males. Droppings in the middle of a road or two-track usually mean the ‘cats are traveling the road. Droppings on the side or shoulder usually indicate road crossings.

Bobcats have been a target of fur-takers since colonial times, but they had relatively little value until the mid ‘70’s. A major event happened in 1973 that got the ball rolling: passage of the Endangered Species Act. The ESA stopped the import of fur of endangered cats which greatly increased the demand for lynx and bobcat pelts. The value of all pelts taken in the US went from $5,000 in 1970-71 to nearly $6 million in 1976-77.

Another event in 1973 that greatly influenced the harvest of bobcats was the Convention on International Trade in Endangered Species of Wild Fauna and Flora (CITES) which eventually listed the bobcat in its Appendix II to be sure there was “no detriment” to its survival. It is still listed, but only because of its similarity to other spotted cats that are endangered. A CITES harvest tag or seal is still required for all bobcats taken. Harvest is allowed in 38 US states and seven Canadian provinces. Average prices paid for western “lynx cats” in 2011-12 were $500-700, with select pelts bringing $1,000 apiece. Prices for ‘cat pelts should be excellent again this season.

Males are more prone to harvest than females, likely due to more aggressive behavior, bigger home ranges and more roaming. Even with some sex ratio imbalance in a population, reproductive potential can be quite high when prey is abundant. That fact coupled with large areas inaccessible to harvest (i.e., private land closed to harvest, remote public lands and now even suburban environments) suggests there’s very little chance of over-exploitation on any significant scale. Harvests of 20% or less are considered acceptable by most authorities. The biggest problem in managing bobcats is the lack of effective techniques for estimating and monitoring ‘cat populations. Bobcats are hard to count!

Growing bobcat populations and distribution across the US provide an excellent fur harvest opportunity for both callers and trappers. A properly handled pelt makes a great trophy or can pay for a lot of gas.