Biology article for the September 2012 issue of Group Howl 8/24/2012 – By Claude Oleyar
​
The North American bobcat (Lynx rufus) is becoming a popular target of predator hunters in many parts of the US. And for good reason: 1) they present unique challenges compared to their canine colleagues, 2) their distribution is increasing, 3) their populations are stable or increasing in most of their range and 4) their pelts are highly valued in the fur market.
​ 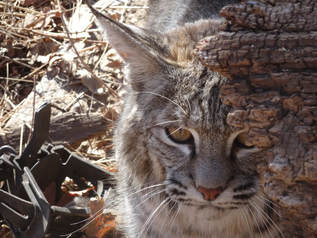 ​The bobcat goes by many common names: bay lynx, catamount and wildcat among others. The silky, high-dollar cats of the west are often called lynx cats in the fur trade. The genus name Lynx is Latin for lamp or to shine (referring to how cat eyes reflect light at night) and rufus is Latin for red, referring to the reddish color of many bobcats.

The bobcat and its northern cousin, the Canadian lynx (Lynx canadensis) are distinguished from most other felines (or felids) by a short tail, prominent ear tufts, facial ruff or collar, and 28 teeth instead of the normal 30 of most cats. Lynx can be distinguished from bobcats by their noticeably larger feet, longer ear tufts and completely black-tipped tail. Both are rather long-legged, with somewhat smallish, blunt-shaped heads.

Bobcats are distinctly spotted, especially on the white belly and legs. Lynx much less so. The predominant color can be reddish, bluish gray, tawny (tan) or a darker brown, usually with subtle markings.

Bobcats are considered medium-sized in the cat world, with males typically in the 20 – 25 lb range and females 14 – 18 lbs. Bergman’s Rule seems to apply, with body size increasing as you move north or higher in elevation. A very few cats reach the 35 – 40 lb range. As implied, bobcats are dimorphic, with males typically significantly bigger and heavier than females.

Bobcat tracks are quite round compared to the more oval shape of coyotes and red foxes. Four toe pads are rather distinct, with the retractable claws rarely showing. Another key distinguishing feature from canine tracks is that the front edge of the heel or plantar pad is two-lobed, rather than single. Tracks are typically 1.5 – 2” wide and 1.5 – 2.25” long. They can appear much larger in snow. Red fox-like, the rear feet are often placed directly over the front foot impressions, producing a single row of tracks.

Historically, bobcats occurred in all 48 contiguous states, across southern Canada and well into Mexico. However, with development, intense agricultural practices and low prey densities, bobcats were largely extirpated (wiped out) along the mid-Atlantic coast and in several Midwestern states (i.e., Illinois, Indiana, Iowa, Michigan, Missouri and Ohio). Fortunately, that appears to be changing, with bobcats now occurring in all contiguous states except Delaware. Although difficult to survey and monitor, populations are reportedly stable or increasing in all states but Florida, where some decline has been noted. The total estimated population throughout the US is roughly 2,352,000 to 3,572,000 individuals. There are 12 recognized subspecies.

Typical of cats, bobcats are polygamous with dominant males mating with multiple females and taking no part in rearing young. Most breeding occurs in February into April. Gestation is comparable to domestic cats and not unlike wild canines, roughly 63 – 65 days. Generally there is one litter per year, with average litter size around 2.5. Pregnancy rate and litter size may be related to prey availability and other density-dependent factors.

Kittens are born blind and helpless. Their eyes open in 9-18 days. Kittens emerge from dens in 33 – 42 days and soon begin consuming solid food. By 3 months (roughly June) they start accompanying the female on hunting forays. They generally stay with their mother until the next breeding season, while developing their hunting skills. Dispersing kittens are transients until they locate a suitable home range or territory. Dispersal distances range from almost nothing to 12 – 25 miles. The known record is over 100 miles. Maximum life expectancy for wild bobcats is around 12 – 13 years. The record in captivity is 32.2 years.

Bobcats basically lead a solitary lifestyle within their respective home ranges. Home ranges vary considerably depending on several factors. In some parts of the country and habitats, home ranges of 1 sq mi or less are common. In others 6 – 20 sq mi are more typical. Home ranges of males are generally 2-3 times larger than those of females and often overlap several female home ranges.
​
In Part 2 of our look at bobcat biology, we’ll focus more on bobcat behavior: traits, lifestyle, hunting skills, interactions, etc., plus some fur-related facts. Until then, start gearing up. Hunting season will be here before you know it!