​Rabies is a viral disease of mammals that is most often transmitted through the bite of a rabid animal.  It has been present primarily in bats for many years.  It was rarely found in terrestrial mammals in Colorado from the late 1960’s until 2007.  In 2007 rabies began showing up in skunks along the eastern edge of the state and has continued to spread westward.  During 2010, 129 cases were confirmed in wildlife, including 64 bats, 63 skunks and 7 foxes.  Fortunately the various strains of the virus are largely species specific and don’t cross over readily to other species.  For example, a raccoon bitten by a rabid skunk would likely contract the disease but an outbreak of rabies in the local raccoon population would not likely occur.  Incidents of rabies in wild animals typically peak in March and April.
​ 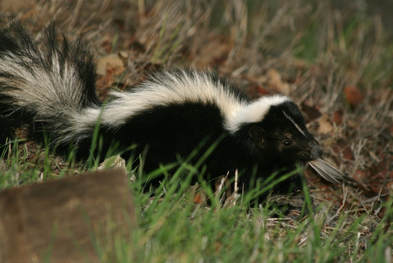 ​As a result of possible contact with the 139 rabid animals in Colorado in 2010, 45 humans and 168 domestic animals were known or strongly suspected to have been exposed.  Fortunately, post exposure rabies vaccine is very effective in preventing the disease when administered soon after exposure.

Over the last three years, the largest number of confirmed cases in wildlife have come from the area comprised of Douglas, Elbert and El Paso Counties.  In El Paso County, year-to-date (January 1-June 8, 2011) there have been nine cases confirmed in skunks and one in a fox.

Symptoms of rabies in wildlife can include tremors/convulsions, partial paralysis, disorientation, nocturnal animals boldly active during daytime, no fear of people, and unprovoked aggression.  If you see a skunk or other wild animal demonstrating these odd behaviors, keep a safe distance and report the incident to one of the following as soon as possible:
Any of these can assist in containing/capturing the animal and submitting it for rabies testing.  If human or pet exposure has been observed, or is possible, report the incident immediately to:
​
Communicable Disease Section
El Paso County Department of Health & Environment
Business hours:  719-578-3220
After hours:  719-235-2278