﻿ The Lifestyle of the Gray Fox - Alpine Wildlife Control

The Lifestyle of the Gray Fox
​

The spunky, spirited gray fox (Urocyon cinereoargenteus) was my favorite wild canine as a novice, teenage fur trapper and predator caller in Virginia in the early 1960’s. They were beautifully marked and colored, they readily came to a call and they’d often snoop around our camp at night and challenge us with their rather coarse and harsh bark. They were sometimes a challenge to trap, too. Many great memories!
​ 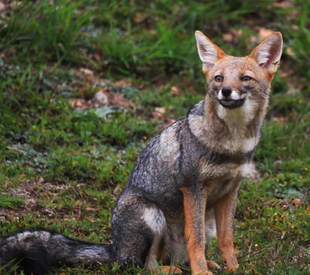 Although grays have many typical fox-like traits, they are a distinct genus from all other foxes. In some ways they are quite cat-like, being rather independent, preferring fairly heavy cover and edges, comfortable in very tight quarters and having a unique ability to climb trees. They are able to rotate their rather short, stocky front legs to hug a tree, grasp with their long curved claws and push up with their hind legs.

Like other foxes, grays are mid-sized predators (meso-predators), weighing 6-15 lbs, or so. The largest I took in Virginia was over 13 lbs, while most in Colorado are 6-8 lbs. Grays are very distinct in appearance, with a very uniform grizzled salt and pepper upper body with rusty and white patches on the neck, belly and legs. Reds have the distinctive, long, bushy cylindrical tail with a white tip. Grays have a very distinctive long, bushy tail with a ridge of course, black guard hairs on the dorsal side, ending with a black tip. Facial features are very delicate.

Gray fox distribution is more southern than that of boreal reds, roughly from the Canadian border to northern South America. Also, they prefer more woodland and mixed habitats in the east and scrub oak, pinion-juniper and brushy/rocky areas in the west. Although they don’t mind being around people, gray foxes don’t seem to be nearly as adapted to urban areas as red foxes, or even coyotes.

Home range size varies regionally and seasonally, typically 74-494 acres in western areas to over 1600 acres in the southeast. All North American foxes are opportunistic foragers with a highly variable diet. Gray foxes are perhaps the most omnivorous of all. Their diet includes a host of small animals (especially rabbits, voles, mice) plus various birds and all sorts of insects, fruits and nuts. Like other foxes, they hunt by pouncing, stalking and chasing. They will also cache surplus food, thus the famous “dirt-hole set” used by trappers. As with other foxes, grays are largely nocturnal with peak activity at dawn and dusk (i.e., crepuscular).

We don’t know nearly as much about gray fox behavior and ecology because of limited research compared to other canines. Gray foxes, like other foxes, are monestrous (i.e., breed once a year) and are mostly monogamous. They can breed from January to April and reproduce within their first year. Gestation is around 59 days, give or take. Litter size is 1-10, with 4 being the average. Dens can be enlarged earthen dens of other species (e.g., woodchucks), or brush piles and hollow logs and trees. Pups or kits can begin foraging with adults at 3 months. Timing of dispersal and distances are highly variable. Some are capable of hunting on their own at 4 months, while others don’t disperse until January or February. Grays don’t seem to be as territorial as other foxes, but they do scent mark with urine and feces. They also have a variety of vocalizations.

Gray foxes are often sympatic (i.e., coexist) with red foxes in some areas and coyotes in others. Interactions with red foxes can go either way depending on respective population levels and perhaps individual levels of aggression/dominance. My impression is that grays tend to be more feisty and dominant. However, in the foothills of the Front Range where I live, canine distemper, or perhaps parvovirus, wiped out the native gray foxes in the ‘70’s, at which point the introduced reds moved in and took over the niche. The grays have yet to recover. Coyotes will kill grays if they can catch them. On multiple occasions I’ve had coyotes kill both red and gray foxes caught in traps. However, unlike mountain lions, they don’t eat them.
​
Rabies and canine distemper can take a heavy toll on gray foxes, however grays seem to be much more resistant to sarcoptic mange compared to red foxes and coyotes. A variety of external and internal parasites (e.g., heartworm) are common, but usually tolerated.

Due to their rather coarse fur, lower harvest numbers and perhaps uniquely patterned colors, gray fox are not as valuable a fur resource as other foxes. However, they are common in many areas, easy to call (i.e., hunt) and generally easy to trap with both footholds and cage traps. Note: I’ve caught a few in wooden box traps set for rabbits, so tight that the fox could hardly move. Fur prices for properly handled pelts should bring $30-35 this season. That will certainly pay for your gas with some left over. Give grays a try. It’s a lot of fun.